In the mid-1850s, the elders of the 1st and 2nd Presbyterian Churches of Chicago decided to establish an institution of higher learning north of the city. They envisioned a co-educational university, which would include a boys’ preparatory department and a girls’ seminary department. During a scouting visit to find a location, they discussed a name for their site; one pastor suggested “Lake” for Lake Michigan and “Forest” for the woods, and thus the name Lake Forest came to be.

In 1856, Sylvester Lind of Chicago pledged $100,000 in matching funds to the project, and so Lind University was chartered on February 13, 1857. Lind lost his wealth in the Panic of 1857, and was unable to fulfill his financial promise. As a result, the school was renamed Lake Forest University in 1865 (and later changed to Lake Forest College).

The boys’ preparatory department, Lake Forest Academy, opened in the fall of 1858, and was the first school of any kind to open in Lake Forest. The collegiate department opened next in 1861, but as a result of the Civil War, it closed in 1863 and would not reopen until 1876. Both Lake Forest Academy and Lake Forest College maintain the tradition of tracing their founding to February 13, 1857, the date of the establishment of Lind University.

While a girls’ seminary department was also chartered as part of Lind University in 1857, the Young Ladies’ Seminary at Ferry Hall did not open until 1869. On August 2, 1869, the Lake Forest University Board of Trustees announced that: “…the Seminary for Young Ladies, included in the provisions of their charter, will be opening for the reception of pupils on Wednesday, Sept. 22d, 1869." In contrast to LFA, Ferry Hall maintained the tradition of tracing the school’s founding to the opening year of 1869 for anniversary celebrations. Today at LFA, “Ferry Hall Day” is celebrated annually on September 22nd.

In its first year, the Academy enrolled five students and one instructor, Professor Samuel F. Miller. Three years before his role as the first Headmaster at LFA, Miller had been an engineer involved in the building of the North-Western Railroad from Chicago to Milwaukee. 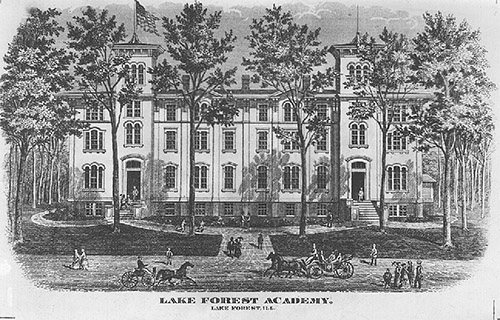 From the beginning, the Young Ladies’ Seminary at Ferry Hall took immense pride in its campus and location. The school residents enjoyed comfortable amenities such as gas lighting and steam heat. 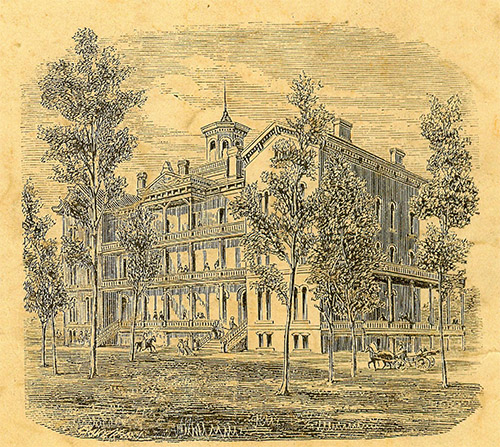 The first principal, Edward P. Weston, had previously served as Superintendent of Public Schools of Maine and as Principal of the Maine Female Seminary. In an era when girls typically did not study science, the school provided scientific laboratory tools as well as a “cabinet of minerals” for student use. There were courses in math, sciences, modern languages, philosophy, history, morals, Latin, and government. June 28, 1871, marked the first commencement ceremony, with four students graduating. In 1887, the school faculty voted to drop the name “Young Ladies’ Seminary” and the school became known simply as Ferry Hall.

At Ferry Hall, Principal Sabra Sargent took the helm from 1894-1904, immersing the young women in Progressive Era issues of the day. The students became active in the Missionary Society and YWCA, and reformers such as Jane Addams and Jacob Riis came to speak at Ferry Hall.

Principal Eloise Tremain arrived in 1918 and remained until 1945, making the school a financially strong and academically solid institution. She also set a tone of utmost propriety, placing a high value on proper behavior and etiquette.

In 1925, under the leadership of Richards and Tremain, both Lake Forest Academy and Ferry Hall legally separated from Lake Forest College. LFA still remained physically located on the college campus. 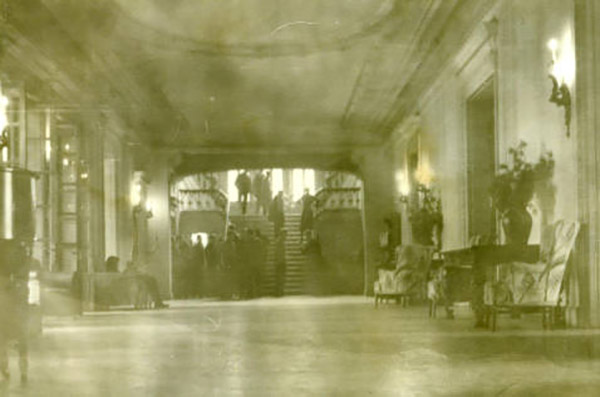 On May 26, 1946, Reid Hall, the Academy’s main building, was destroyed by fire. Headmaster Frank Bowditch saw this as an opportunity for LFA to leave the campus of Lake Forest College, and move to a new location. Bowditch oversaw the purchase of the old J. Ogden Armour estate (Mellody Farm) which included 800 acres of land for $400,000. The mansion was converted into classroom space, a library, infirmary, and cafeteria, while the stables, orangerie, and gardener’s cottage were converted into dorms. Bates House dormitory was quickly constructed, and athletic fields were created. The school opened for classes at the new campus in fall of 1948. 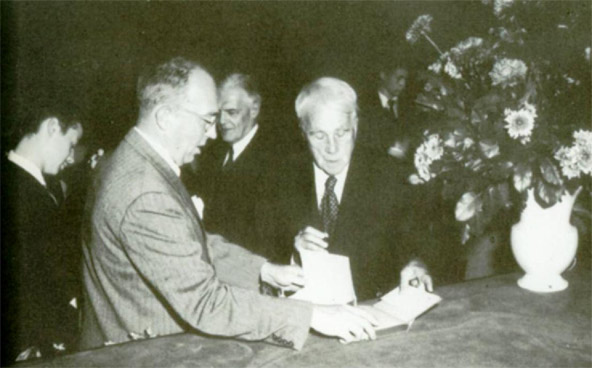 During the 1950s and 1960s, Headmaster Harold Corbin embraced the notion of language-centered education and brought Robert Frost to the school for a week-long visit of teaching and workshops. Impressed with the school, Frost returned again in 1961. Over the years LFA would host many writers and poets in residence, including Gwendolyn Brooks, Stuart Dybek, Rick Moody, and Paul Muldoon.

The campus expanded with the addition of the Charles F. Glore Memorial Gymnasium in 1953, the Marshall Field House dormitory in 1965, and the Corbin Academic Center in 1969.

Throughout the late 1960s and early 1970s, the relationship between LFA and Ferry Hall became much closer as the schools embarked on a kind of co-educational program. In general, the trend was moving away from single-sex education, and LFA and Ferry Hall were adapting to the times. Students took classes at both schools, riding buses between the campuses. Finally, in 1974, the two independent schools merged into Lake Forest Academy - Ferry Hall. Within a few years all the students lived at the LFA campus, and the Ferry Hall property was sold. LFA-FH would go through a turbulent time reflective of the overall cultural upheaval of the era. 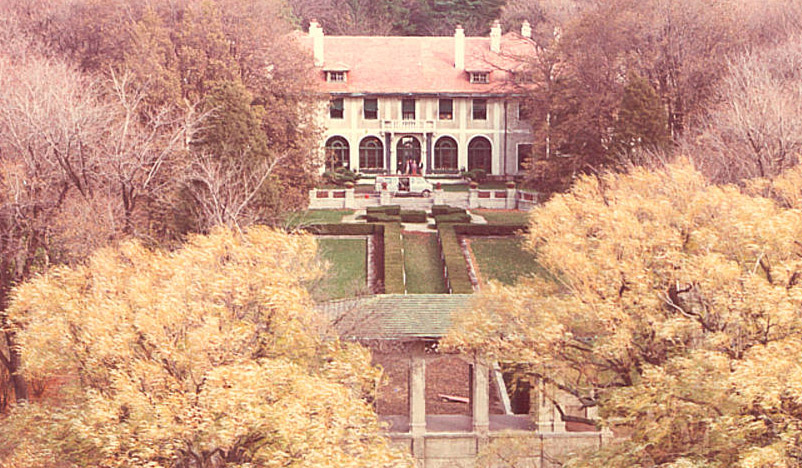 During the mid 1980s, Tom and Bondy Hodgkins, took over as head couple at LFA-FH. They re-embraced the model of scholarship and athletics and emphasized a traditional prep school atmosphere. In 1988, the school decided to phase out “Ferry Hall” from its name, and use the name Lake Forest Academy.

In 1982, Reid Hall was added to the National Register of Historic Places. In 1985, Hutchinson Commons (the dining hall), the Keller Chapel, and the MacKenzie Ice Rink were all dedicated. In 1987, the Wetzel-Schoellhorn Track was dedicated and construction began on an enclosure for the MacKenzie Ice Rink. The school also proceeded to annex itself from the City of Lake Forest, and conducted a mid-1990s sale of property to developers of the Academy Woods subdivision. In 1999, a newly built dormitory named Atlass Hall opened for boys. 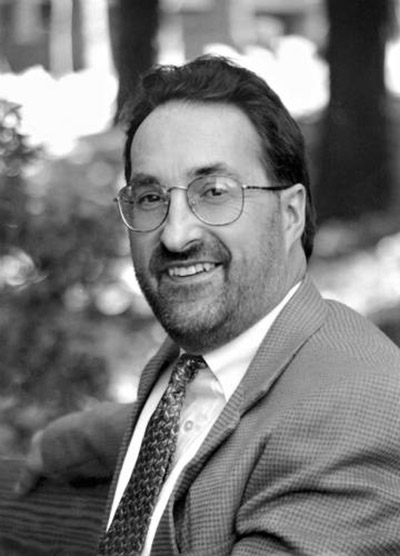 In 2001, Dr. John Strudwick came on board as Head of School at LFA and brought a new vision to the traditional prep-school model by embracing the notion of global pluralism. Dr. Strudwick has overseen many improvements to the physical campus and academic technology. In 2001, the Cressey Center for the Arts opened, providing a venue for performances and assemblies. In 2006, the West Village faculty homes were constructed. In 2009, the Fitzsimmons Athletic Wing was dedicated, and in 2010 the Crown Fitness and Wellness Center was completed. Durand Hall (renamed Weinbrenner House) was relocated and renovated in 2011, making space for a new girls’ dormitory, Ferry Hall (completed in 2012).

This was followed by the construction of the Reyes Family Science Center in 2013, and renovations to the Corbin Academic Center and Korhumel Wing were done in 2014. Funds raised from the 2015 Spring Gala went towards improving the lighting, sound, and production capabilities of The Cressey Center for the Arts. In fall 2016, the JC Cowart Student Center, which houses the dining hall, snack shop, bookstore, student recreational areas, and the Stuart Center for Global Leadership, opened.